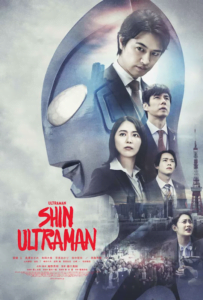 Anime Frontier Powered By Crunchyroll, in partnership with Tsuburaya Productions and Fathom Events, will host a special screening of the new feature film SHIN ULTRAMAN! North Texas fans will receive a front-row seat to view the rebirth of beloved Japanese character ULTRAMAN during this screening at Anime Frontier at 1:00 PM on Sunday, Dec 4 on our Main Stage!

General seating will be first come, first served with Anime Frontier 3-Day or Sunday admission. Limited Reserved seats will be given away by Anime Frontier, Ultraman Connection, and Fathom Events.

The Anime Frontier Special Screening is in celebration of SHIN ULTRAMAN’s upcoming nationwide release on January 11-12 by Fathom Events.

Written by Hideaki Anno and directed by Shinju Higuchi, SHIN ULTRAMAN is both a love letter to the classic Japanese hero and bold rebirth, presenting him like never before to fans of all ages. The film is an exciting revisiting of the fundamental ideas and concepts of the original ULTRAMAN, depicting a modern world where human eyes witness ULTRAMAN for the first time.

The continued appearance of giant unidentified life forms known as “S-Class Species (Kaiju)” has become commonplace in Japan. Conventional weapons have no effect on them. Having exhausted all other options, the Japanese Government issued the S-Class Species Suppression Protocol and formed an enforcement unit, known as the SSSP.

In the midst of the Kaiju threat, a silver giant appears from beyond Earth’s atmosphere.

Analyst Hiroko Asami (played by Masami Nagasawa) is newly appointed to the SSSP to deal with this giant and is partnered with Shinji Kaminaga. In Hiroko’s report, she writes—

Be one of the first 100 to get in line for SHIN ULTRAMAN to get a free poster direct from Japan! The first fans at Anime Frontier’s special screening will receive an official SHIN ULTRAMAN poster from Tsuburaya Productions! 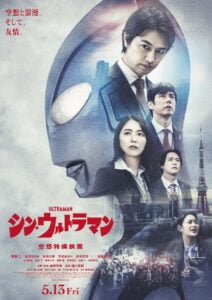